A special spotlight is used to project closed lines (360°).

The Topliner projects a cross on the ceiling and on the ground just next to the laser, allowing you to expand a plumb line on the floor and ceiling.

This laser is ideal to use both inside and outside (with optional receiver) for walls, ceilings, tiling, kitchens, fencing, façades, etc.

Turning 90 ° corners for walls, tiles, kitchens, etc. is time-saving with this Topliner 3x360.

The ADA Topliner is a self leveling laser with a high accuracy of 2 mm at 10 meters.

And works on li-ion batteries of 3300 mA

The operating time with all lines on is about 8 hours, when the Li-ion battery is fully charged The lines can be switched on and off separately.

The laser also works when it is connected with the supplied charger at 230 Volt.

The Topliner 3x360° also features a hand receiver mode, which makes it possible to detect the laser beam with an optional handheld receiver at a distance  between 20 and 40 meters from the laser.

It is also possible to fix the lines of the instrument simply by placing the switch in the middle position, making it possible to place the laser at an angle.

The 5/8 "connection sits on the provided 360 ° rotatable rotation foot with fine adjustment to turn the laser very accurately in a certain direction. 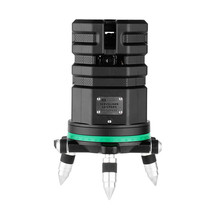